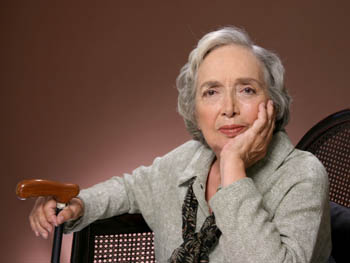 Bay Street Theater mourns the passing of Sloane Shelton. She was in the world premiere of Men's Lives, Bay Street Theater's first production and she also starred in Eudora in 2006, and it later went on tour.

SLOANE SHELTON a regular on the Broadway & Off-Broadway stage as well as in film & television died Thursday in NYC at the age of 81 after a long battle with lung disease.

Born in Asheville, North Carolina, she studied in London before making her Broadway debut in THE AFFAIR in 1962; I NEVER SANG FOR MY FATHER, BOOM BOOM ROOM, THE SHADOW BOX, PASSIONE, OPEN ADMISSIONS, ORPHEUS DESCENDING and her memorable 2 year run as "Mrs Shandig" in THE RUNNER STUMBLES followed.

Her final Broadway appearance was as "Mrs Wendel" in the Lincoln Center Theater revival of DINNER AT EIGHT replacing Marian Seldes as "Constance Vance" for the final weeks of the run in 2003.

Her numerous off-Broadway performances included originating the role of "Mrs. Hummel" in the Public Theatre production of THE BASIC TRAINING OF PAVLO HUMMEL by David Rabe, several Playwrights Horizons productions as well as working at the Vineyard, Irish Rep, and Primary Stages among several others.

Her last off-Broadway role was in 2004 at the Lucille Lortel Theatre in Theatre for New Audiences' revival of ENGAGED directed by Doug Hughes. Ms. Shelton also worked extensively in regional theaters across the country: Williamstown Theatre Festival, Long Wharf Theatre and Actors Theatre of Louisville to name just a few.

Her over 30 TV & film appearances included "Law & Order: Criminal Intent," "Soul Man," "LA Law," "Orpheus Descending" and all the soaps. She had featured roles in the films "All the President's Men," "All That Jazz" "Jacknife," "Lean on Me," "Running on Empty," "I Never Sang for My Father," "Pollack," "What Lies Beneath," "One True Thing" and "The Confession."

She leaves behind her partner and spouse of 50 years Jan Buckaloo.