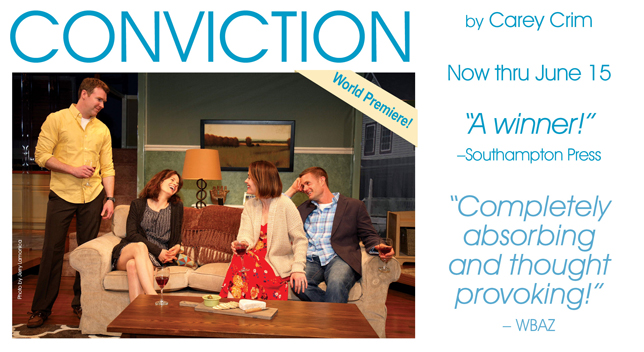 The cast of CONVICTION production shot by Jerry Lamonica

The World Premiere of CONVICTION, May 27-June 15

CONVICTION, May 27-June 15,  tells the story of the family of Tom Hodges, a charismatic, confident and caring teacher that students adore and parents admire. The smart, wise-cracking colleague with all the answers. The neighbor who takes care of the neighborhood. The perfect husband and father. But when a student accuses Tom of crossing a line, everything changes. This delicately balanced, beautifully nuanced new family drama digs deep beneath the surface of a happy suburban existence to explore the damage done when seeds of mistrust are planted. It asks the question -- How can we live with conviction when some questions cannot be answered?

Single tickets go on sale May 15. Three-play subscriptions for the 2014 Mainstage Season, including CONVICTION, can be purchased online now!

The 2014 Mainstage Season is sponsored in part by:
New York State through the generosity of Assemblyman Fred Thiele and State Senator Kenneth P. LaValle
New York State Council on The Arts, a State Agency
Town of Southampton
The Harold and Mimi Steinberg Charitable Trust
The Shubert Foundation
Fully or partially funded by the Suffolk County Executive’s Office

Previews weeks for the 2014 Mainstage Season are sponsored by