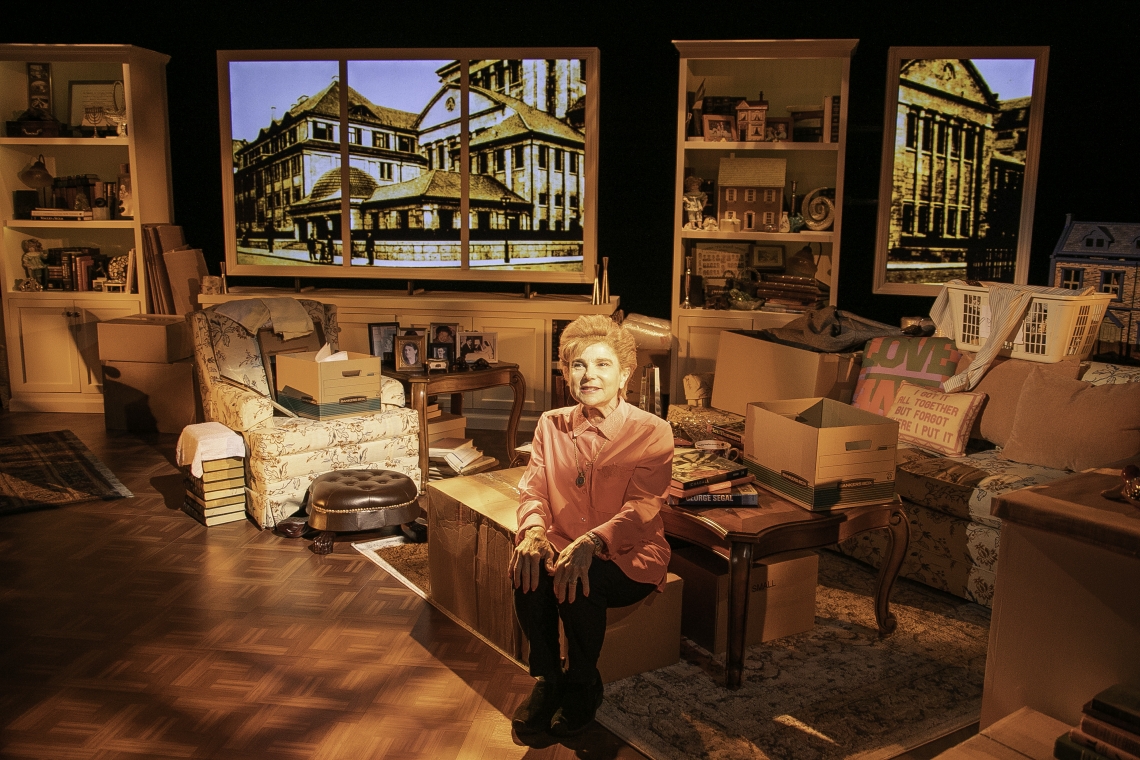 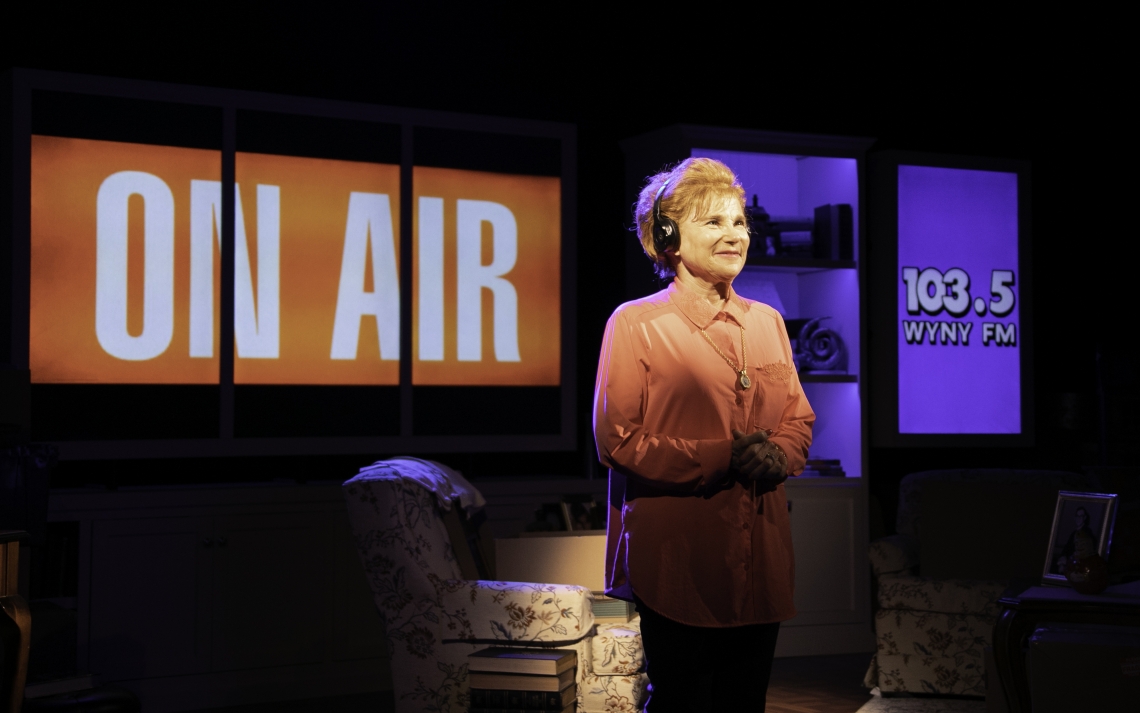 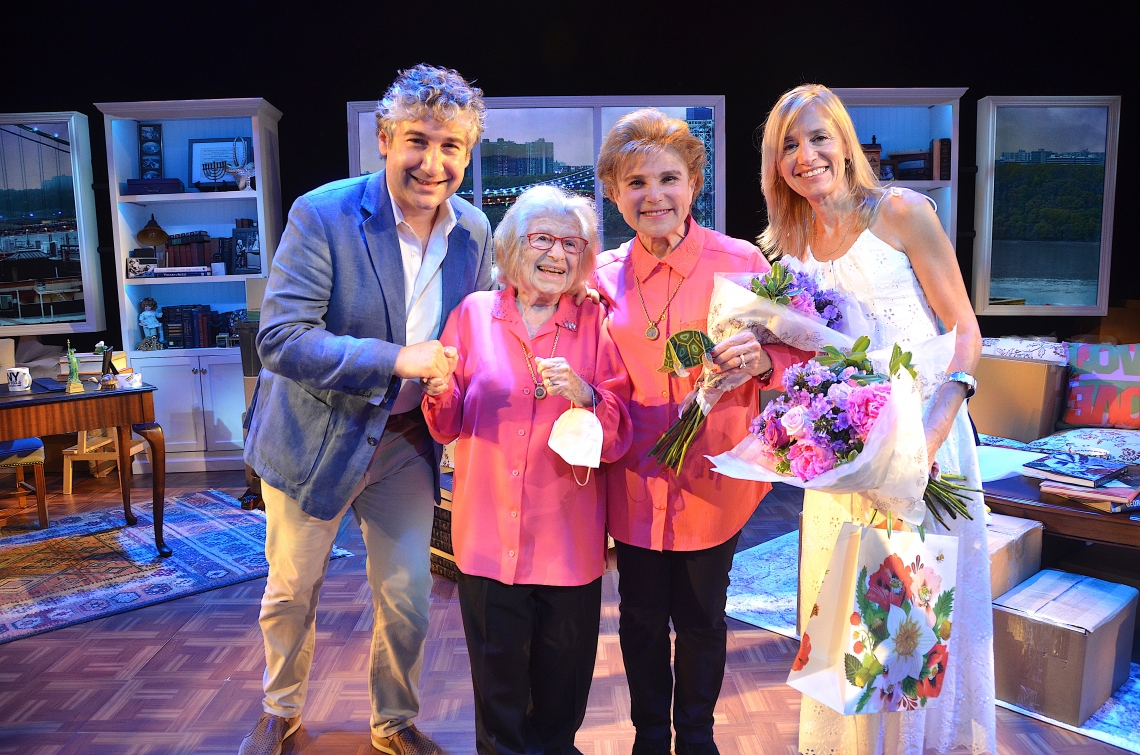 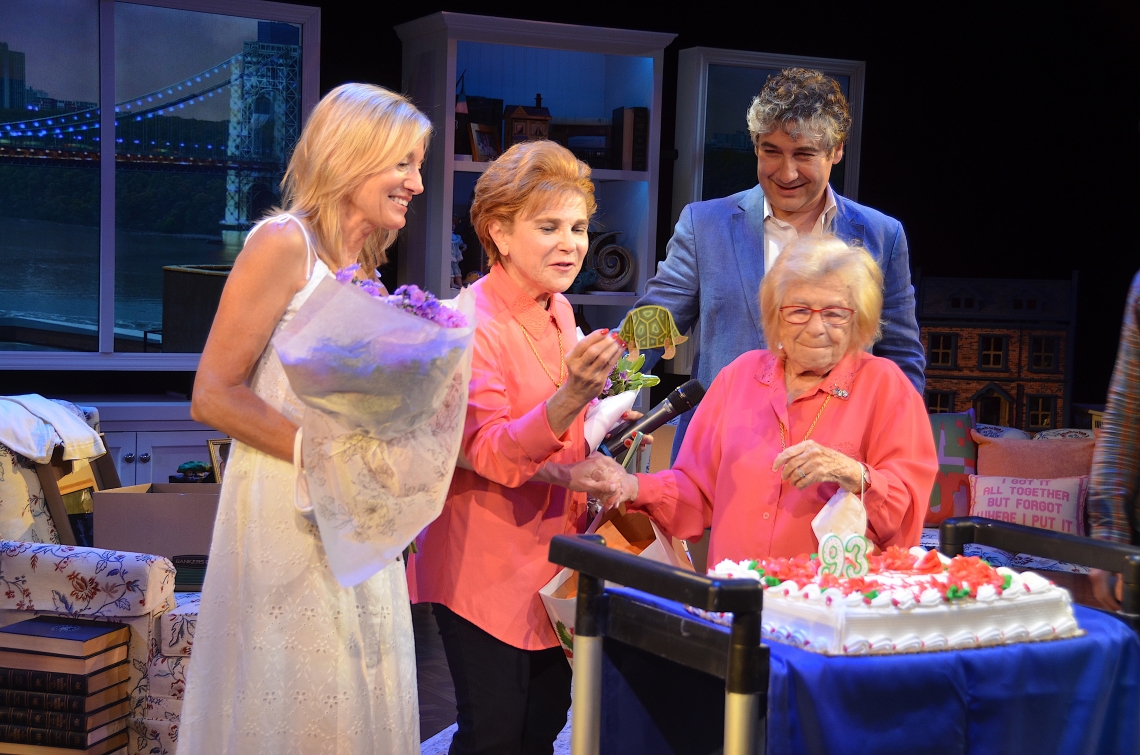 “An illuminating portrait … both fascinating and heartbreaking.

Will resonate long after the lights have dimmed.”

“Powerful, informative … a story that must be told over and over again, and never forgotten.”

Becoming Dr. Ruth chronicles the life of noted psychologist Dr. Ruth Westheimer, from her early years fleeing Nazi Germany, living as an orphan in Switzerland, to her service in the Israeli armed forces as a sharpshooter, and her later life and career in New York. It is a humorous and heartfelt portrait detailing Dr. Ruth's remarkable journey to become a pioneer in the psychology of human sexuality and the world's most famous sex therapist.

This production has a runtime of 90 minutes with no intermission and will be performed for a social-distanced audience indoors on Bay Street’s Mainstage in compliance with all New York State requirements for indoor performances. 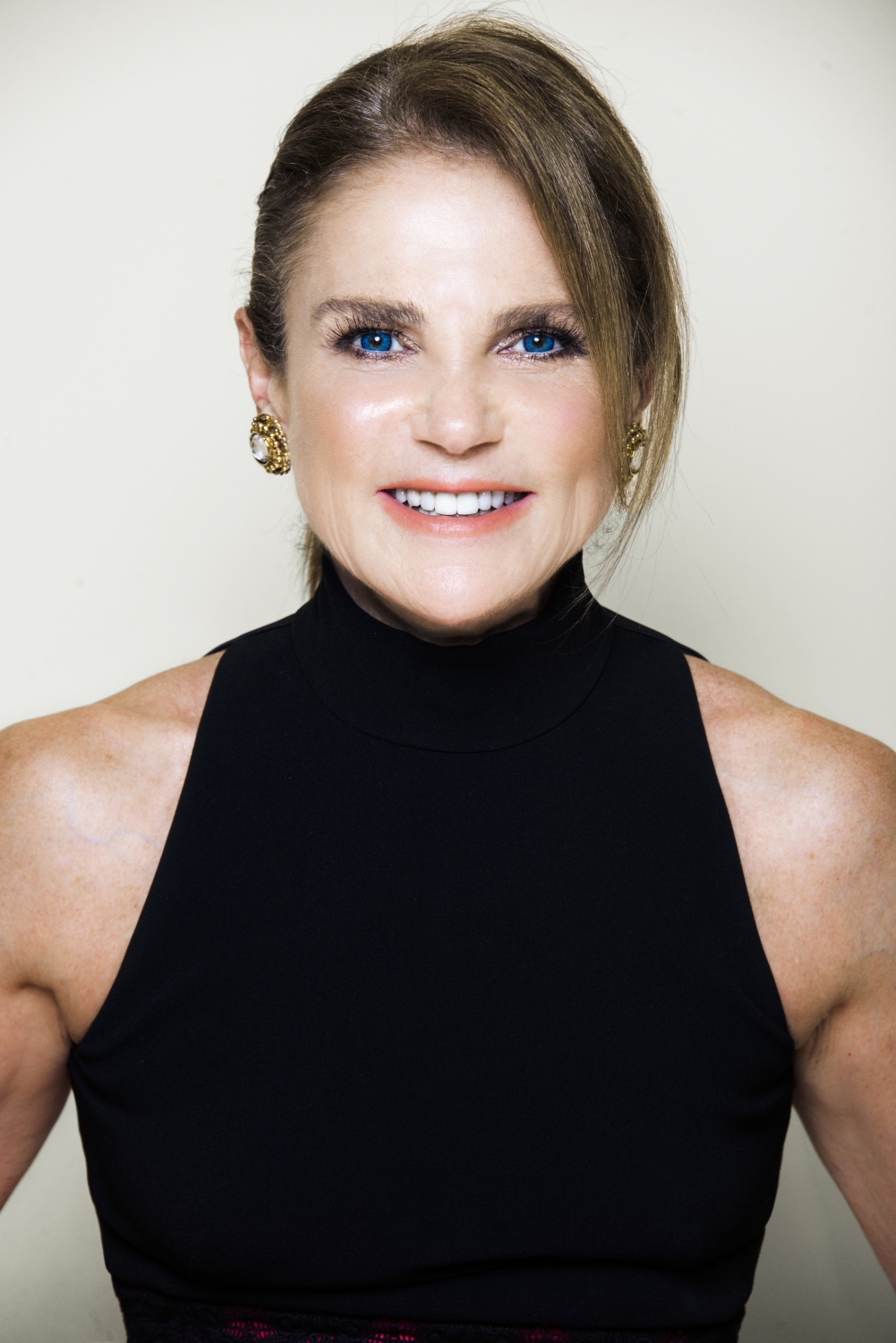 Tovah Feldshuh is a six-time Emmy and Tony Award-nominee and has been awarded three honorary Doctorates of Humane Letters. Additionally, for her theatre work, she has won four Drama Desks, four Outer Critics Circle Awards, three Dramalogues, the Obie, the Theatre World, and the Helen Hayes and Lucille Lortel Awards for Best Actress. She has just been twice nominated as Best Actress in a Drama in Los Angeles for her work in the play Sisters-in-Law, in which she originated the role of Supreme Court Justice Ruth Bader Ginsburg.

On the Page: Ms. Feldshuh recently won the prestigious Audie award for her narration of The Gift by Holocaust-survivor, Dr. Edith Eger. Tovah’s first memoir, Lilyville: Mother, Daughter, and Other Roles I’ve Played, published by Hachette Book Group, was published in April, and has been chosen as a must read by Good Morning America and an Amazon Editors’ Pick for Best Biography and Memoir. Lilyville can be purchased on Amazon, Barnes & Noble, Target, Indie Bound and more. See www.tovahfeldshuh.com/lilyville for more information and to order.

On the Stage: Broadway credits include Yentl, Cyrano, Rodgers & Hart, Dreyfus in Rehearsal, Sarava!, Lend Me a Tenor, Golda's Balcony (directed by Scott Schwartz), Irena's Vow, and the show stopping, trapeze-swinging Berthe in Pippin (composed by Stephen Schwartz). Off-Broadway and around the country: Dozens of productions playing everything from Aunt Abby Brewster in Arsenic and Old Lace, also under the baton of Scott Schwartz, to three queens of Henry VIII and Tallulah Bankhead to Yussel “The Muscle" Jacobs, nine Jews from birth to death in Hello Muddah, Hello Fadduh! and, most recently, Holocaust denier Brenda Goodsen opposite Ed Asner in The Soap Myth. In the summer of 2019, she starred in the world premiere of Wade Dooley’s The Prompter at Bay Street naturally directed by Scott Schwartz, where she played Irene Young, a legendary diva making her Broadway comeback after a 40 year absence. Immediately on the heels of The Prompter, she filmed Clifford for Paramount Pictures, traveled to the Sing-Sing in New Guinea, and flew from there to Los Angeles to star as Ruth Bader-Ginsburg in the LA Premiere of Jonathan Shapiro’s Sisters-In-Law. She is thrilled to be back at Bay Street once again to play Dr. Ruth.

On TV: Deanna Monroe on The Walking Dead, Danielle Melnick on Law & Order, POTUS Pauline Mackenzie on Salvation, and Naomi Bunch on Crazy Ex-Girlfriend where Feldshuh can be seen singing the dignified showstopper: Where's the Bathroom! In February of 2021, she completed filming Scenes from a Marriage for HBO playing Oscar Isaac’s mother, Miryam.

On Film: Kissing Jessica Stein, (Golden Satellite Award), A Walk on the Moon, Brewster's Millions, Just My Luck, Daniel, The Idolmaker, and most recently, Ms. Feldshuh's award-winning performance as Prime Minister Golda Meir in Golda's Balcony has been made into a film entitled Golda's Balcony: The Film which has won 20 out of 20 Audience Choice Awards. Before the pandemic, she completed filming Edith Hagigi’s Bleecker with Ben Stiller.

Her concert, Tovah: Out of Her Mind!, was voted Best One Woman Show of the Year by the Boston Globe. Her other one-woman shows, “Tovah is LEONA!” and “Aging is Optional” enjoyed sold-out engagements in New York, San Francisco, Boca Raton and Delray. She’s the wife of New York attorney, Andrew Harris Levy, the mother of Brandon, married to Jami, and Amanda, married to Joel, and the grandmother of Rafael Levi, Sidney Mei, and Camille Willa. Follow Tovah’s pre-pandemic travels around the world on Instagram @tovahfeld. www.tovahfeldshuh.com.

Mark St. Germain's play Becoming Dr. Ruth premiered July 2012 at the Barrington Stage Company in the Berkshires, played at Hartford Theaterworks, and was brought to New York to the Westside Theatre. His play Freud’s Last Session ran for two years Off-Broadway, closing July 2012, and has been open in Argentina since January 2012 and in repertory in Sweden, Australia, and Denmark. Scott And Hem In The Garden Of Allah co-premiered in the summer of 2013 at the Contemporary American Theater Festival and Barrington Stage Company. His play The Best Of Enemies, first produced by the Barrington Stage Company, is now being produced throughout the country. The Fabulous Lipitones, a musical comedy co-written with John Markus, premiered at the Theatrical Outfit in Atlanta in 2013, and then at Goodspeed Playhouse. Mark’s other plays include Camping With Henry And Tom (Lucille Lortel and Outer Critics Circle Awards), Ears On A Beatle, The God Committee, Out Of Gas On Lover’s Leap, and Dancing Lessons. Mark wrote the Tammy Wynette musical Stand By Your Man, which began at the Ryman Theater in Nashville. With composer Charles Strouse he co-wrote the book for his adaptation of Dreiser’s American Tragedy. With composer Randy Courts Mark has written the perennial musical The Gifts Of The Magi as well as Johnny Pye And The Foolkiller (AT&T Award Grant) and Jack’s Holiday (Playwrights Horizons). Television work includes Writer/Creative Consultant for The Cosby Show and Dick Wolf’s Crime and Punishment. He co-wrote director Carroll Ballard’s film Duma and produced and directed the documentary My Dog, An Unconditional Love Story with Richard Gere, Glenn Close, Edward Albee, and others. Mark also wrote the award-winning children’s book Three Cups. Mark is an Associate Artist of the Barrington Stage Company, a recipient of the William Inge Festival’s New Voices Award, a member of the Dramatists Guild and the Writer’s Guild East, and an alumnus of New Dramatists.

North Coast Repertory Theatre, under the artistic leadership of David Ellenstein since 2003, is a professional Equity theatre currently celebrating its 39th Season. North Coast Rep has received critical acclaim from media and audiences alike, and has evolved into one of the area’s leading performing arts organizations. North Coast Rep prides itself on employing the majority of its actors from Actors’ Equity Association for its high quality, award-winning productions, and staging works by established and emerging playwrights. Throughout its history, North Coast Rep has created a platform where artist and audience thrive through the intimacy of live theatre, recognizing the power of theatre to challenge complacency, revitalize the imagination, nurture the unexpected and embrace the variety and diversity in our lives. An irreverent mash up of text and imagery from Jules Verne’s "20,000 Leagues Under the Sea" and the writings of environmentalist Rachel Carson, "20,000" promises to be a surprising voyage to unexpected places. Using live projection and audio interviews, "Smile" puts the audience at the center of a Harlem-born photographers family archive.

This new envisioning of the story of King Arthur, Guenevere, and Lancelot is told with intimacy, immediacy, and incandescent passion. The beloved musical explores one of the greatest romances of all time and paints a luminous picture of a fleeting moment when justice, peace, and righteousness reigned supreme.