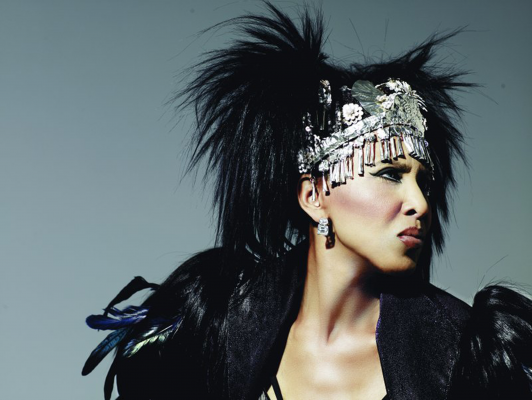 With the purchase of a $75 ticket, guests are invited to a private pre-concert cocktail reception and art auction at Tutto Il Giorno restaurant, 16 Main Street, Sag Harbor from 5 – 6:30 p.m.

Can’t make the event? You can still bid on the art: https://paddle8.com/auction/planned-parenthood/

NONA HENDRYX, One-third of the pop/soul act Labelle (their big hit was Lady Marmalade), Nona Hendryx, by far, made the hippest solo records of any member of that group (the others being Patti LaBelle and Sarah Dash). After LaBelle called it quits in 1976, Hendryx released her self-titled debut record, which was an amazingly strong amalgam of soul and hard rock. In the 80s, she fell in with a hip crowd of musicians, including David Johansen, Peter Gabriel, Prince, Yoko Ono, Cameo, Garland Jeffreys, and Afrika Bambaataa, and sang for a time with Talking Heads. Her 1985 album Heat featured a stellar cast of players including guitarists Ronnie Drayton and Keith Richards, bassists Doug Wimbish and Bernard Edwards, saxophonist Lenny Pickett, and vocalists Will Downing and Gang of Four's Hugo Burnham. LaBelle reunited in 2007 and issued Back to Now on Verve in 2008. The set was produced by the legendary Philadelphia International team of Kenny Gamble and Leon Huff, and included several Hendryx compositions.  In the summer of 2012, she followed it with the self-produced Mutatis Mutandis, for Ani DiFranco's Righteous Babe label. Hendryx collaborated with eclectic guitarist Gary Lucas for the 2017 album The World of Captain Beefheart, featuring new interpretations of the music of the experimental rock icon.

VERNON REID, As the lead guitarist of Living Colour and a co-founder of the Black Rock Coalition, Vernon Reid has done a great deal to undermine stereotypical expectations of what music black artists ought to play; his rampant eclecticism encompasses everything from hard rock and punk to funk, R&B and avant-garde jazz, and his anarchic, lightning-fast solos have become something of a hallmark as well. Born in London, Reid and his family emigrated to Brooklyn while he was a child; he began playing guitar at age 15, initially studying jazz and progressing quickly. Over the course of the 1980s, Reid worked with a wide variety of experimental musicians -- Defunkt, Bill Frisell, John Zorn, Arto Lindsay, and Public Enemy, among others. Around 1983, Reid formed the first version of what was to become Living Colour; in 1985, with journalist Greg Tate, he formed the Black Rock Coalition, an organization devoted to opening doors in the music business for black musicians who were not content being confined to the roles of soul crooner or rapper. Living Colour did not really begin to jell until their lineup stabilized in 1986, and when Mick Jagger saw the group perform at CBGB's and invited them to appear on his Primitive Cool album. Jagger went even further, producing two demo tracks and helping to convince Epic to sign the group. Living Colour debuted to massive critical acclaim in 1988 with Vivid; the group lasted through Time's Up (1990) and Stain (1993) before disbanding in 1995. Reid has continued to make periodic appearances on numerous star performers’ recordings, and in 1996, he issued his solo debut, Mistaken Identity. He resurfaced in 2002 as one half of Yohimbe Brothers, a duo also featuring DJ Logic. Reid has remained active as both a session guitarist and as a producer.

*Please note that this is a rental event. Any and all topics presented or discussed may or may not reflect the views of Bay Street Theater or its employees.