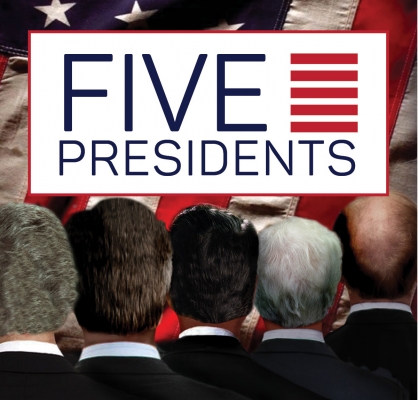 By Emmy Award-winning writer Rick Cleveland (Six Feet Under, The West Wing, and House of Cards)
Directed by Mark Clements

This production was originally produced at the Arizona Theatre Company and the Milwaukee Repertory Theater. This funny and incisive new drama is about the meeting of America’s most exclusive club – the ex-presidents. Obliged to gather together on the day of Richard Nixon’s funeral, four “exes” and one “current” vent frustrations, revisit old grievances, and reveal the toll that it takes on any person foolish enough to seek the highest office in the land.

"Wickedly clever and fast paced, delivering an evening of recent history peppered with a heavy dose of sarcasm and wit. Delicious!"
-Southampton Press
Click here to read the review from Southampton Press!

"A smart and compelling play! A wonderful cast, enthralling story, and the beautiful Bay Street Theater make for a truly thrilling night of theater."
-Broadway World
Click here to read the review from Broadway World!

"Thoughtful and dramatic, yet considerate and humorous... An intriguing and entertaining new play!"
-NY Theatre Guide
Click here to read the review from the NY Theatre Guide!

"Playwright Rick Cleveland pulls back the curtain on five presidents in 1994 and reminds you that behind every Commander-in-chief is a human being with pride and doubt and a whole lot of courage. Five Presidents gave me hope for America, proving that when we connect beyond our politics, it makes the world a better place. A triumph for Bay Street."
-Walker Vreeland, 102.5 WBAZ-FM 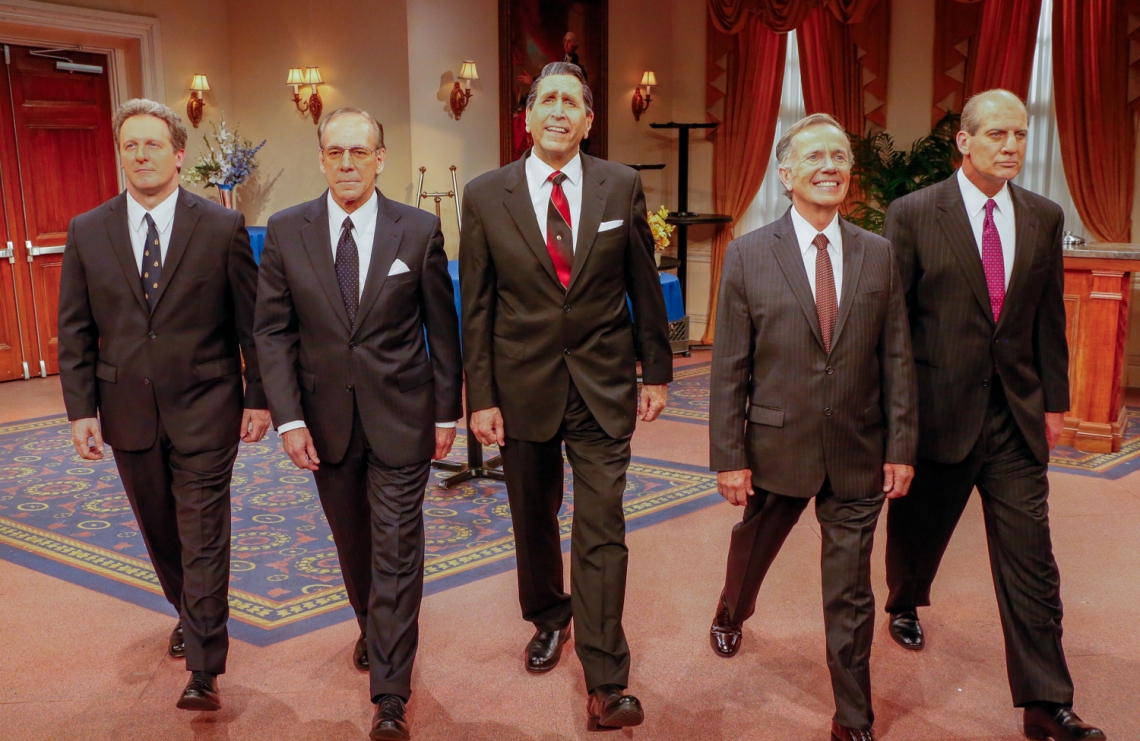 Click here to read a Q&A between Rick Cleveland, the writer of Five Presidents, and Dan's Papers!

PAY WHAT YOU CAN
Performance will be on June 23 at 7 pm.
“PWYC” tickets are limited and will be available at the Box Office beginning at 2 pm on the day of.

FREE STUDENT SUNDAY MATINEES
Returning this year for the Mainstage Season.
High School and College students can receive (1) FREE admission for each Sunday matinee performance.
Student ID must be shown. Based on availability.

HAPPY HOUR
1/2 price drinks for ticketholders only at the bar one hour before curtain!

Mark Jacoby (George Herbert Walker Bush) happily returns to the Bay Street, having previously appeared here in Rumble in the Ring. His Broadway roles include Walter Hobbs in Elf, Judge Turpin in Sweeney Todd, Padre Perez in Man of La Mancha, Father in Ragtime, Gaylord Ravenal in Show Boat (Tony, Outer Critics, and Joseph Jefferson Award nominations), Baron von Gaigern in Grand Hotel, and Vittorio Vidal in Sweet Charity (Theatre World Award). Also in New York: Critical Darling for The New Group, Sitting Pretty for The Hypothetical Theatre, and Enter the Guardsman for The Vineyard Theatre (Drama Desk nomination). Mark played The Wizard of Oz in the First National Tour of Wicked and was seen regionally in The Play’s the Thing (Shakespeare Theatre of New Jersey), Life x 3 (Repertory Theatre of St. Louis), Sleuth (Maltz-Jupiter Theatre), Fiddler on the Roof  (Walnut Street Theatre/ Barrymore Award), The Visit (Goodman and Signature Theatres/ Helen Hayes Nomination), and Nine  (Joseph Jefferson Award) as well as in the World Premieres of The Nutty Professor (Southern Stage Productions), Secondhand Lions (Fifth Avenue Theatre), and Leading Ladies (Alley Theatre, Cleveland Playhouse). On TV, Mr. Jacoby has been seen on all 3 Law & Order’s and by viewers of New York’s now-lost soap operas on The Guiding Light, As the World Turns, One Life to Live, and All My Children.

Martin L’Herault (Jimmy Carter) is happy to be making his Bay Street Theater debut!  Previous New York credits include Jimmy Bulkeley in Bonus Army and New York Comedy Repertory Ensemble (Founding Member). Regional credits include Jacob Smith in Sleep in Safety: The Death of Octavia Hatcher (Jenny Wiley Theatre); Lee in True West and George in Of Mice and Men (The Gard Theatre); Bob Ewell in To Kill a Mockingbird (Children’s Theatre of Madison); Pseudolus in A Funny Thing Happened on the Way to the Forum and Jesus in Godspell (Dobama West); and Launcelot Gobbo in The Merchant of Venice (Wisconsin Shakespeare Festival). Television credits include Judge Chillingworth on A Crime to Remember and Philip Bates on I’d Kill for You. Lifetime credits include Father of Kimberly L'Herault.  martinlherault.com

Steve Sheridan (Ronald Reagan) Steve is delighted to be appearing for the first time at Bay Street Theater in Five Presidents. Steve is an alumnus of Chicago’s famed theater, The Second City, where he wrote and performed in a number of hit shows, including Jean-Paul Sartre and Ringo (Joseph Jefferson Award nomination).  His stage work in Los Angeles garnered him awards from LA Weekly and Drama-Logue for both acting and playwriting.  Film credits include Nothing in Common and Vice Versa. His television work includes appearances on Curb Your Enthusiasm, The Drew Carey Show and Malcolm in the Middle. Steve studied theater at Dartmouth College.

Mark Clements (Director) Mark is proud to make his Bay Street debut with Five Presidents. Mark began his tenure as Milwaukee Rep’s Artistic Director with the 2010/11 season. He is an award-winning international theater director whose work has appeared in over 100 major theaters throughout Europe and the United States. Recent productions include: Five Presidents, The Color Purple, The History of Invulnerability, End of the Rainbow, Ragtime, Clybourne Park, Assassins, Othello, Next to Normal, Death of a Salesman, Bombshells and Cabaret at The Rep; Oliver!, Born Yesterday, Great Expectations, Les Misérables (2008 Barrymore Award – Best Production of a Musical) and Of Mice and Men (2007 Barrymore Award – Best Director and Best Production of a Play), all for Walnut Street Theatre, Philadelphia; The Milliner (Off -Broadway, World Premiere), CSC, New York; My Fair Lady, Copenhagen; The Browning Version (Barclays/TMA Regional Theatre Award) at Derby Playhouse and Blunt Speaking (World Premiere), Chichester Festival Theatre U.K. and Lucille Lortel Theatre, New York. Other productions include: Speaking in Tongues (U.S. Premiere), Roundabout Theatre Company; Speaking in Tongues (European Premiere; Barclays/TMA Best Director Nomination), Hampstead Theatre, London; Creator/Director – Soul Train, West End and three U.K. national tours; and the U.K. national tours of The Glass Menagerie, The Gingerbread Lady and Love & Marriage, all for Bath Theatre Royal productions. Mark served as an Associate Artistic Director for Moving Theatre Company, the production company founded by Vanessa and Corin Redgrave. He has also been Associate Director for New End Theatre and New Players Theatre, both in London, Royal Theatre in Northampton and Torch Theatre in Wales. Additionally, Mark served as Artistic Director of the award winning Derby Playhouse in the U.K. from 1992 to 2002. He serves on the National Advisory Board for the Lunt-Fontanne Fellowship Program at Ten Chimneys.

Rick Cleveland (Writer) is an Emmy winning writer/producer whose television credits include "The West Wing," "Six Feet Under," "Mad Men," "Nurse Jackie," and "House Of Cards." Rick's stage play "Jerry and Tom" was adapted into a feature film and was an official selection at both the Sundance and Toronto Film Festivals, and he co-wrote the screenplay for the motion picture adaptation of John Grisham's "Runaway Jury," which starred John Cusack, Rachel Weisz, Gene Hackman and Dustin Hoffman. Rick performed his one man show "My Buddy Bill" at the Berkshire Theatre Festival, the Goodman Theatre in Chicago, Victory Gardens Theatre in Chicago, the Geffen Playhouse in Los Angeles, and won the Best Solo Performance Award at the HBO Comedy Arts Festival in Aspen in 2006. He also performed the piece at the 92nd Street Y in New York City for a one hour Comedy Central special in 2007. As a playwright, Rick has earned playwriting grants and fellowships from the National Endowment for the Arts, the Rockefeller Foundation and the Kennedy Center's Fund for New American Plays. Rick was invited to the National Playwrights' Conference at the Eugene O'Neill Theatre Center twice, and is a Ensemble Member of American Blues Theatre, Chicago's second oldest ensemble based theatre company, as well as a Founding Member of the Ojai Playwrights Conference. He received his MFA from the University of Iowa's Playwrights' Workshop. Several of his plays have been published by Samuel French and Dramatists Play Service, and have been produced around the country, as well as in the UK, Germany, Scotland, Moscow, Mexico City and Istanbul. Rick has been a freelance commentator for NPR's "All Things Considered" as well as a contributor to Huffingtonpost.com, and as a freelance journalist his writing has appeared in the Chicago Tribune, the Los Angeles Times and Outside Magazine.