TO KILL A MOCKINGBIRD
Directed by Joe Minutillo 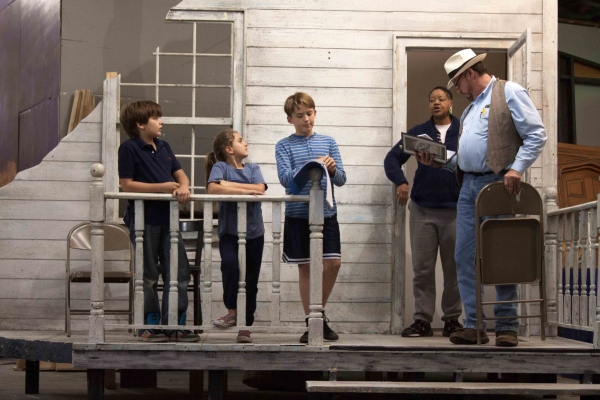 Bay Street’s newly staged production of TO KILL A MOCKINGBIRD is based on the novel by Harper Lee and was adapted for the stage by CHRISTOPHER SERGEL. Bay Street Theater is also offering a FREE Student Ticket Initiative for all students. Schools have the opportunity to bring students to the theater to get a unique understanding of the subject matter by witnessing the characters from great plays and novels living and breathing and telling their stories right before their eyes.

“Since the start of this program six years ago, we’ve brought nearly 10,000 students from 51 schools across Long Island,” says Tracy Mitchell, Bay Street Theater’s Executive Director. “In working to ensure that theater remains accessible, this year we offered a Free Student Ticket Initiative. And we’ve seen a large jump in the number of students attending because of it. I hope everyone will take advantage of this opportunity.”

The novel by Harper Lee published in 1960, was an instant success, winning the Pulitzer Prize. It has become a classic of modern American literature. The characters in the book and the plot are loosely based on Lee’s observations of her family and neighbors reactions to an event that took place in 1936 when she was just 10 years old. She grew up in the Southern town of Monroeville, Alabama, where she became close friends with Truman Capote, and spent two and a half years writing the book.

The novel, noted for its poignant exploration of the meaning of courage and compassion, has become a cornerstone of the English Language curriculum as students today still face such issues as bullying and racism. The story takes place in Alabama during the Great Depression, where Jem and Scout Finch’s father has been appointed to defend Tom Robinson, a black man framed for a crime he did not commit. Jem and Scout witness their community’s tug of war between justice and racism. They ultimately learn not to judge someone until they have gained an understanding of people’s motives and behavior.

LITERATURE LIVE! brings Classic American literature to life on stage in 90 minute professionally staged productions for audiences of all ages. Weekday performances are designed for school groups, which gives the students the unique opportunity to experience the power of the classic literature they have studied through live performance. LITERATURE LIVE! also offers supplemental programming to create a complete multi-sensory experience of the book at hand. Donate today to help keep this program FREE for students by logging on our website at www.baystreet.org or by calling the Development Department at (631) 725-0818.

All Students are FREE with a valid ID and adults $25. To book groups or to buy single tickets, call the Box Office at 631-725-9500 or buy online at www.baystreet.org. The Box Office is open Tuesday through Saturday 11 am to 5 pm.

Literature Live! is a BOCES-approved Arts-in-Education program. Plays chosen are from standards-based literature and are supported with teacher-developed lesson plans and reference materials. All performances are 90 minutes and weekday shows are followed by a question and answer session.

"The Literature Live! program consistently showcases superb productions of often-taught classic works; it dovetails beautifully with high school English Language Arts curricula, allowing students to experience a work read in class in a different medium, to analyze and compare directorial and authorial choices, and to think critically about genre, point of view, character motivation, and how a work changes from page to stage. The talk-backs with cast and director following student performances are an extra, enlightening treat. Literature Live! is a highlight of the year for students and faculty alike; we’re so lucky to have Bay Street Theatre close by and generously committed to supporting the education of local students."

LITERATURE LIVE! brings the power of the word from the page to the stage. Using curriculum-based literature, Bay Street Theater creates a unique learning experience by bringing professional theatre artists together to present first class productions. The possibilities for insight and understanding of the subject matter are only increased when students can witness the characters from a great play or novel living and breathing and telling their stories right before their eyes.

LITERATURE LIVE! is designed specifically with middle and high school age students, their teachers and administrators in mind. In addition, Bay Street Theater will present the play on weekends for family audiences, and other types of groups (such as seniors, churches, and temples) who may wish to attend.